Not just a splash, but a wave of color fills the University of Northern Colorado’s Campus Commons. More than 90 luminous prayer flags flutter on the walls of the main hall. Each flag, very different from the other, is the image of a divine feminine or a goddess created by a strong woman herself.

“When my aunt started doing printmaking, there weren’t many stories about female artists, let alone images of women. So she went searching, traveling to find images of goddesses around the world,” Katie Hoffner said. 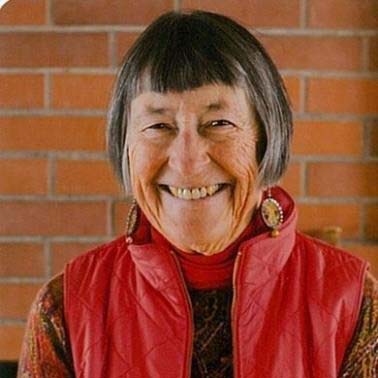 Hoffner had two major female influences in his life growing up. Her mother, who had just finished her medical degree and was starting her residency program when she was born, and her aunt, Lydia Ruyle ’72. Ruyle received her Master of Arts and taught women’s studies and art history as a scholar emeritus in UNC’s visual arts program.

“I like to say that I came out of my mother’s womb and into my aunts’ arms,” ​​Hoffner said.

Even before Hoffner was five years old, under the wing of her aunt, she was exposed to the beauty of art. At the time, Ruyle was using her creative mind as a break to help raise five young children.

“She would grab a canvas, lay it on the kitchen counter where our little hands couldn’t reach, and she would start painting,” Hoffner said. 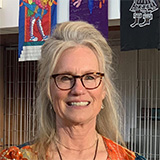 “She started researching and traveling in the late ’90s,” Hoffner said. “For example, she would travel to Mexico to learn about divine female images in situ, in places where they were worshiped, and then bring them back to life in this art form, which is this ripstop nylon banner so that they can fly around the world together.”

Ruyle created more than 300 banners before her death in 2016. She moved to her art studio, not far from where her pieces are currently displayed. To honor her moving work and to celebrate Women’s History Month, Katie Hoffner and UNC Galleries have co-created the exhibit Small Shrines Everywhere: Banners of the Goddess by Lydia Ruyle.

“It brings me to tears because that was my aunts’ goal,” Hoffner said. “For his art to fly on this scale to where they were created. I think she’s dancing in the cosmos right now.

The images of the goddess will be on display until April 8. With every wall covered in energetic banners that represent cultures from all corners, Hoffner hopes those who enter and consume the art leave realizing that women everywhere are to be celebrated.

“Some of these images are over 50,000 years old. The women are all different shapes and sizes and represent different points in a woman’s life, creating a very sacred space,” Hoffner said. “It’s a visual feast of women.”

Former Ruyle student and current professor of arts education at UNC, Connie Stewart, PhD, feels that force when she sees the banners.

“His work is quite magnificent,” Stewart said.

It reminds her how lucky she is to have learned from Ruyle and call her a role model.

“When I first met Lydia Ruyle, the role models in my life were living traditional lifestyles as wives and mothers, and being a wife and mother myself was important to me too. , but Lydia said feminism is about having choices and that’s really been a gift in my life.”

This is the first time that many works depicting Ruyle’s goddess, exploring mythology, spiritualism, women’s rights and storytelling, have been exhibited at Greeley. They have also been exhibited at the National Museum of Women in the Arts, the United Nations World Conference on Women, and around the world, including England, France, Germany, Italy, Korea, Nepal, Peru and Turkey.

The ‘American Pickers’ are coming to Michigan