By Owen Tonks for Mailonline

Marcus Rashford’s fiancée Lucia Loi has given fans an intimate look into her life with the footballer after popping the question.

The Manchester United player’s high school sweetheart took to Instagram on Friday to share a series of snaps of herself and the sportsman taken throughout the year so far, captioning her post with the number “22”.

In one image, Lucia could be seen smiling as she held Marcus’ hand while posing in front of a white love heart made of flowers after he asked her to marry him in May.

In love: Marcus Rashford’s fiancée Lucia Loi gave fans an intimate look at his life with the footballer

In another, they could be seen gazing across the Los Angeles Basin from the Hollywood Hills, with a shirtless Marcus showing off his abundant body art.

Elsewhere, Lucia posed with a glass of juice as she sat in a private jet, while in another they posed next to a white supercar.

Another photo saw the couple posing next to each other on jet skis, while another captured the moment they posed with their pals on the red carpet at the Rise movie premiere. 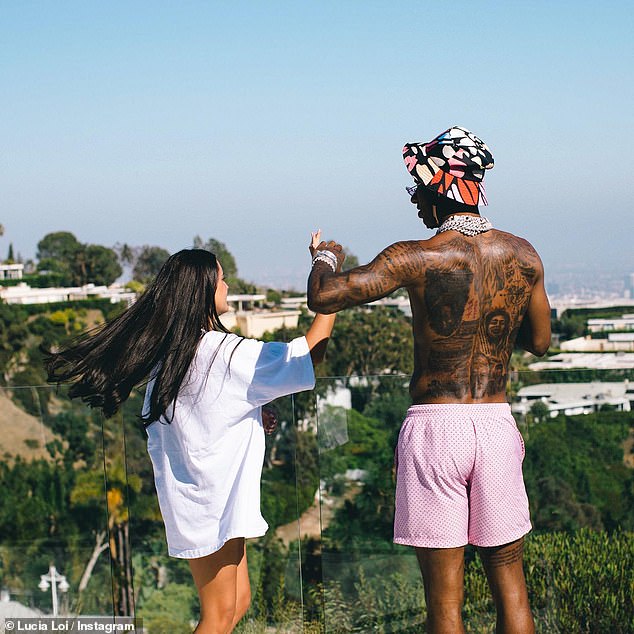 Fun in the sun: The Manchester United player’s high school sweetheart took to Instagram on Friday to share a series of snaps of herself and the sportsman taken throughout the year so far 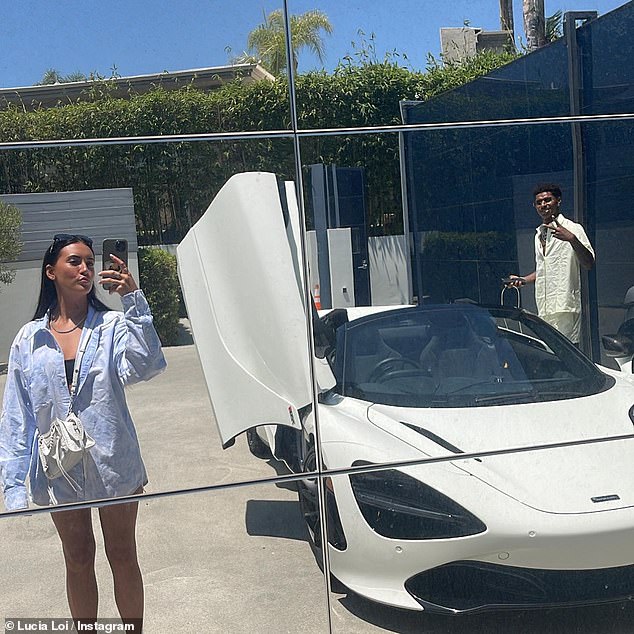 Mirror image: An image showed the couple as they posed next to a white supercar while Lucia took a photo in the mirror

It comes after Marcus popped the question to his significant other, Lucia Loi, during a romantic trip to Hollywood in May.

Marcus confirmed the news on Instagram, posting a photo of him and Lucia – who met at school when they were 15 – sharing a kiss in front of a heart made of flowers.

He wrote in the caption: ‘24.05.22 [white heart emoji] @lucialoi.’ Lucia shared the same image and caption on her page. 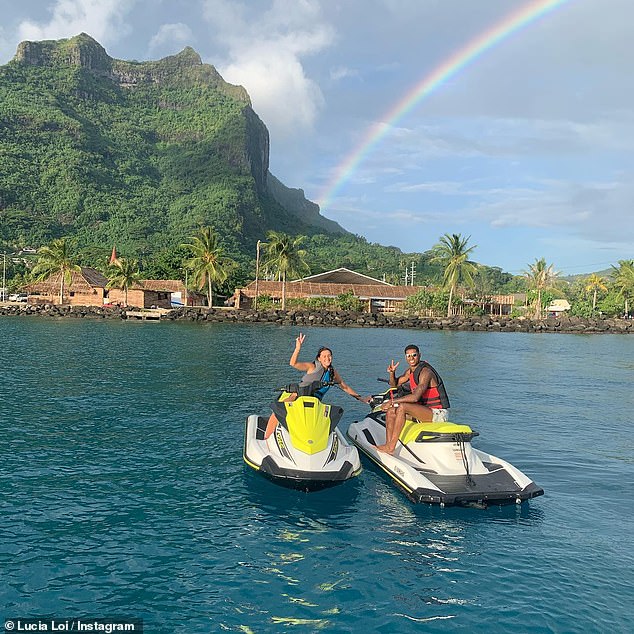 Tropical paradise: Another photo saw the couple posing next to each other on jet skis with a rainbow in the background 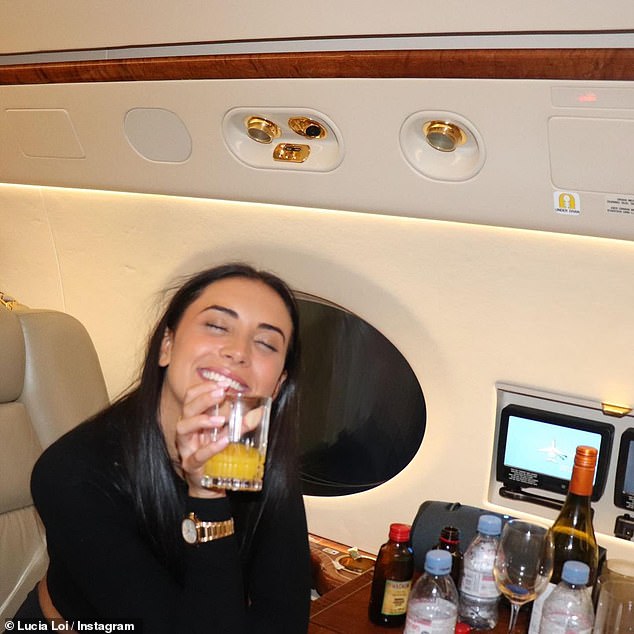 Flying high: Lucia could be seen smiling as she posed with a drink while flying in a private jet with her beau 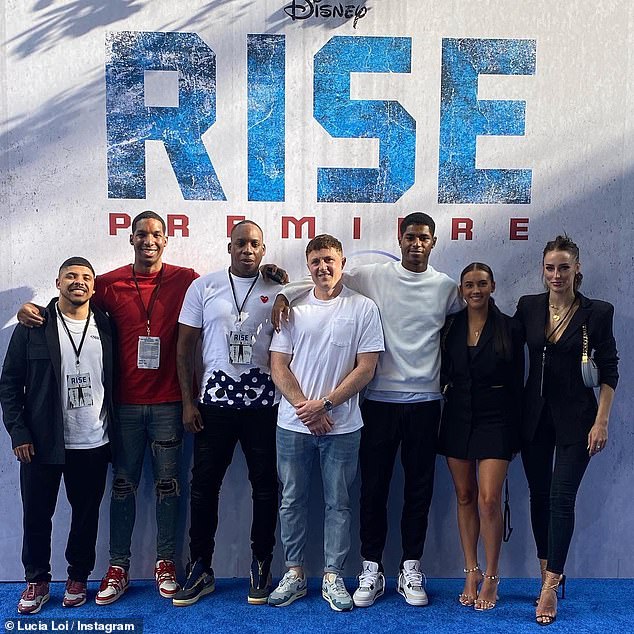 In town: Another caught the moment they posed with their friends on the red carpet at the Rise movie premiere

A source said The sun newspaper: “They are over the moon. Marcus had been planning this for a while and wanted to make it special.

“They went out to Los Angeles for a romantic evening together on Tuesday and he proposed. It was extremely romantic.

“They celebrated afterwards with a group of close friends – including his Manchester United team-mate Jesse Lingard.” 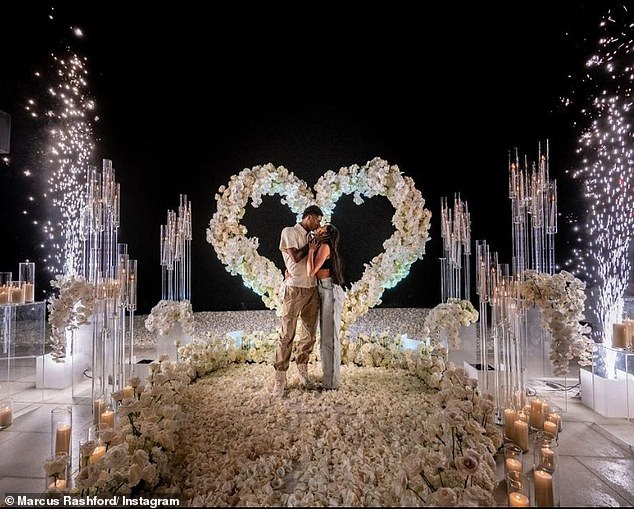 Love and marriage: Manchester United footballer and MBE winner Marcus Rashford is set to wed his childhood sweetheart after he proposed during a playoff getaway in California

According to the publication, England striker Marcus, 24, and Lucia, 24, dined at seafood restaurant Catch LA in Los Angeles before popping the question at their villa.

The source added that the couple’s loved ones were delighted with the engagement news, with Lucia offering “stability, a sense of belonging, relatability and assurance, which can be rare to find in this world”.

As well as making headlines for his footballing abilities, Marcus has also made headlines for his campaign to end child food poverty in the UK, and he was awarded an MBE in the honors list of the UK. queen’s birthday for 2020. 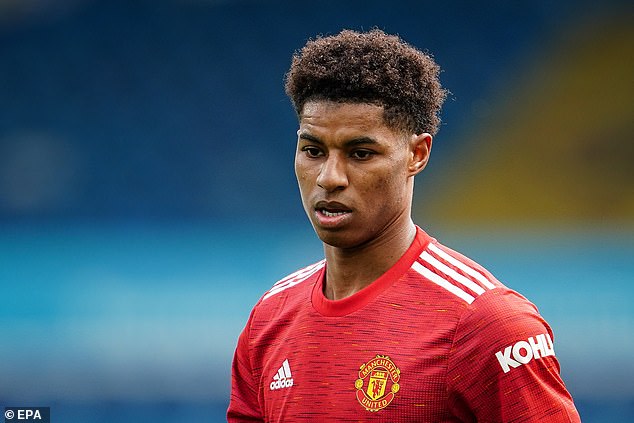 New book reveals everything you need to ...