‘Grand Old Day at Hadley’ to include antique vehicle display

A 1913 Regal was transported Thursday afternoon to the Hadley Mill Museum, where it will be on display until September.

HADLEY – A rare Regal Underslung Model N from 1913 was delivered Thursday afternoon to the Hadley Mill Museum, where it will be on display this summer.

The Regal Motor Company produced automobiles in Detroit from 1907 to 1918.

The public will have the opportunity to see the vintage automobile, manufactured by the Regal Motor Car Company of Detroit, when the museum opens for the season with â€œA Grand Old Day in Hadleyâ€ which runs from 9 am to 4 pm Saturday June 12. The event is free.

This is an opportunity for locals to show off their vintage cars and farming equipment as well as smaller collectibles. Visitors can explore the three floors of the Mill Museum which is full of agricultural and domestic artifacts from Hadley and Elba’s past. The engine used to run the plant will be demonstrated.

The Regal is on loan from the Stahls Automotive Foundation of Chesterfield, Macomb County. David Beckley coordinates the antique car exhibits at the museum. â€œThis is our eighth car that we have on loan. Most were from the Sloan Museum in Flint, â€Beckley said. â€œIt’s a beautiful vehicle. We are really delighted to have him here this summer. “ 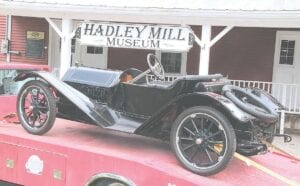 The Model N will be on display this summer – starting June 12 on ‘A Big Old Day at Hadley’. Photos by Jeff Hogan

The Regal Motor Car Company was the second largest maker of what was called the underlying American vehicles. In suspended automobiles, the frame is suspended from the axles rather than the other way around, which lowers the car’s center of gravity. The result was excellent handling, to the point that many consider the American undershoots to be America’s first sports cars.

But two brands, the American Motor Company and the Regal, have resisted this trend with an “ under-suspended ” chassis running under the axles, not above them. 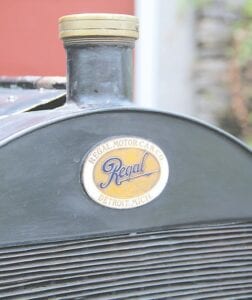 This summer, on display at the Hadley Mill Museum is a 1913 Regal Underslung Model N made by the Regal Motor Car Co. of Detroit.

The Regal Motor Car Company began as a partnership between brothers Bert and Charles Lambert and Fred Haines. Their first cars, produced in 1908, were conventionally built and priced in the mid-price market. Their first suspended models were introduced at the end of 1910, in the smaller 20 horsepower line. This model was called the N model and was initially produced as runabouts. Tourists and coupes were added in the following years.

In 1910, the company introduced the Underslung model which sold for $ 900 for a runabout and $ 1250 for a colonial coupe. As the bodies were interchangeable, the car with the two bodies could be purchased for $ 1,400.

The first full year of production dates back to 1908, with 425 vehicles sold. Their peak dates back to 1915, with 8,227 sales. Power came from the company’s four-cylinder engine. In 1915, a V8 was introduced with a lighter four-cylinder option, both supplied by the Port Huron Construction Company. 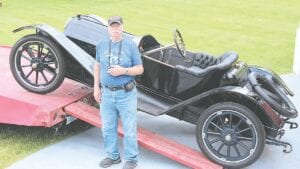 Vehicle Show Coordinator David Beckley was on hand Thursday afternoon when a rare 1913 Regal was delivered to the Hadley Mill Museum.

Between 1911 and 1918, the Regals were brought to the UK by Seabrook and sold under the name “Seabrook RMC”.

A shortage of materials, due to World War I, helped halve production in 1917, and by February 1918 the company was bankrupt.

Area residents who have vehicles and farm equipment or a vintage collection they wish to display during Grand Old Day at Hadley are urged to call event chairperson Dennis Emery at 810-338-6788 .

â€œThose exhibiting will receive a special laser-cut coaster from the mill for their participation,â€ said Kent Copeman, president of the Hadley Township Historical Society which operates the mill museum.

The Hadley Flour and Feed Mill, one of Hadley’s most important monuments, was built between 1873 and 1875. It was the third mill built on the site. In 1986, the building was listed on the National Register of Historic Places. The Mill is located in Hartwig Park, where a covered bridge crosses Mill Creek and leads to a picnic lodge. 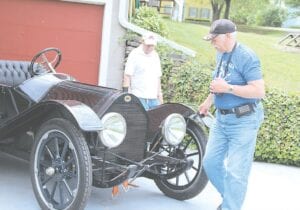 Kent Copeman (left), president of the Hadley Township Historical Society, and David Beckley examine the 1913 Regal on loan to the museum this summer. Beckley coordinates vehicle exhibits at the museum.

â€¢ On July 3, the Hadley Mill Museum will be open for the celebration of the Hadley Fourth of July and will be the site of the start of the annual Hadley Run.

Information on these activities is available on the Hadley Historical Society Facebook page or online at HadleyTownship.org.