Collector picks up the three old versions of Bantam cranes

Garret Wilson has been collecting and restoring antique construction equipment since he was about 20 years old. And on May 1, he found his “holy grail”.

He has a special love for vintage Schield Bantam cranes, cable machines eventually replaced by the hydraulic excavator.

Later, at an antique equipment show, he found another that he ended up buying, a 1965 Bantam C-350 crawler crane.

Then, on May 1, he found what will likely be his new favorite, a Bantam CR-35 trolley crane. The mid-1950s piece was the precursor to the wheeled excavator.

This also means that he acquired all versions of Bantam’s cable crane: truck-mounted, crawler-mounted and trolley-mounted.

“I don’t know if anyone has all three,” he says. “I know guys who have one or the other, two or whatever, but no one I know has all three.”

This Galion Standard Premier horse-drawn road grader was Garret Wilson’s first antique machine. He bought it when he was about 20 and used it to level his driveway. He estimates that it was built in the early 1900s. It was designed to be pulled by four horses or two oxen. It is now parked at the end of his driveway. He restored it and added the “Wilson” on the blade.Garrett Wilson

A scholar and an operator

Wilson, now 37, spent much of his youth in Beaver Dams, New York, studying construction equipment and operating it.

If he wasn’t on the job site, you might find him with his nose buried in a book.

“When I was a kid, I found a lot of comfort reading the encyclopedia. I just read the Encyclopedia Britannica,” he says. “It was the weirdest craze, but I had to know how everything was working. And I found user manuals and books and all kinds of equipment stuff.

He particularly liked discovering cable machines. He would sit quietly with the elders at construction sites, absorbing their knowledge.

“I grew up with the elders. I listened to them talk,” he says. “…They were talking about that stuff and how it all worked.” 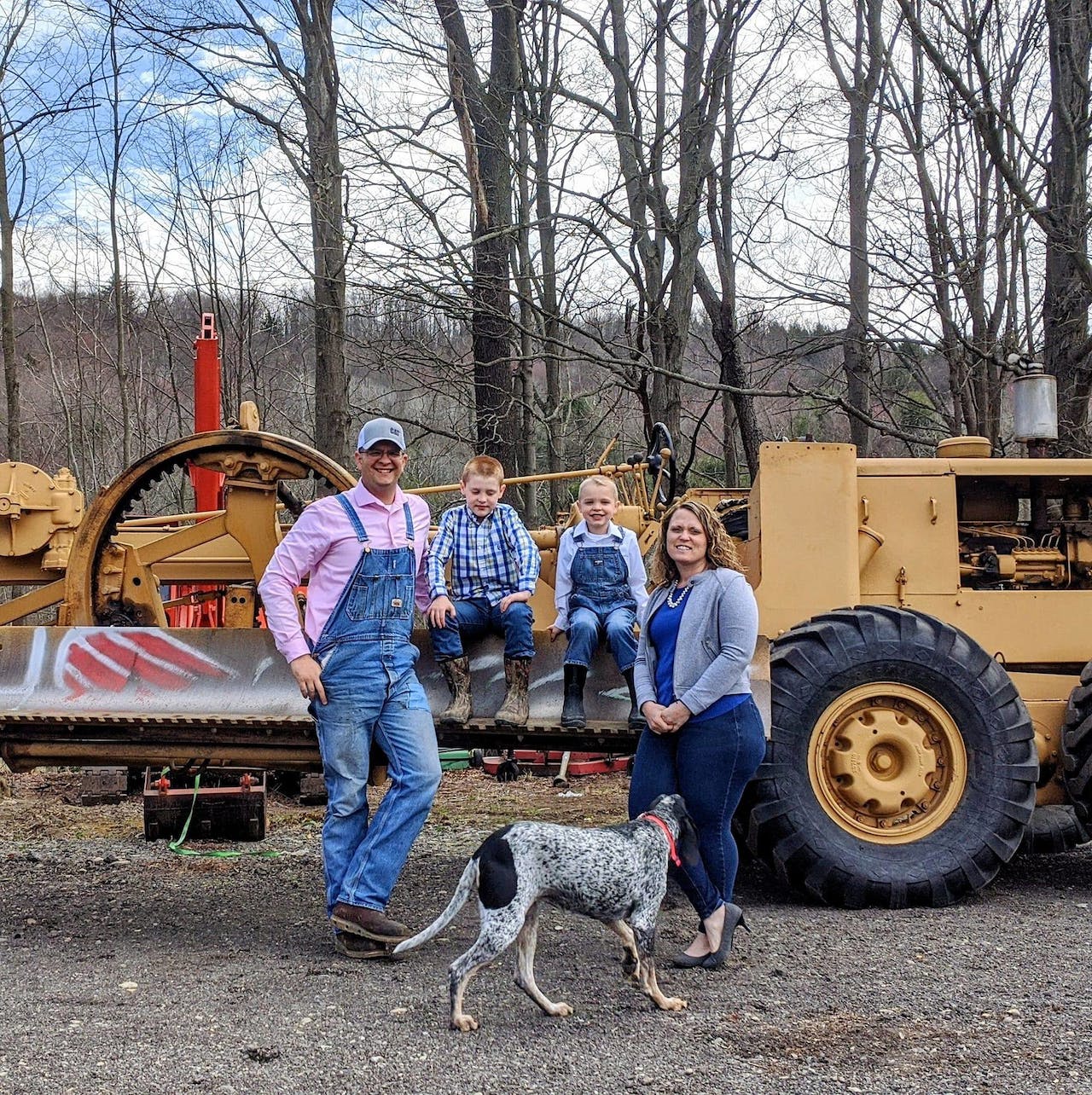 Garret Wilson and his family with an antique grader.Garrett Wilson

“He stayed there for about a week,” Wilson says. “He stayed at a hotel, and they showed him around the factory and stuff. He got to watch them put the crane on the truck and the cab frame.”

Schield Bantam built truck-mounted excavator cranes from 1942. The company was purchased by Koehring in 1963 and the name changed to Koehring-Bantam. It was later acquired by Terex in 1987.

At one time, Schield Bantam was the largest manufacturer of truck-mounted cranes in the world. The company also built tracked and wheeled versions on self-propelled transporters. Attachments, such as the backhoe, shovel, and grapple, were interchangeable between machines. Many cranes were mounted on surplus military vehicles, including half-track and two-and-a-half trucks.

RL Callahan Inc., a contractor in Wilson’s hometown, used the newly acquired Bantam T-350, mounted on the 2.5-ton 6×6 truck, to clear debris that would block waterways in the area. The 11 tonne capacity crane was fitted with a grapple and would be used to reach the bridge abutments to pull up trees and other debris and waste for the motorway service.

After high school, Wilson went to work for Callahan for four years as a laborer and later as a full-time operator.

“They had a bunch of cranes back then, and this one was just sitting,” he recalls. “They didn’t do anything with it. It was still in the yard. It has always been maintained and cleaned.

Wilson then worked as an operator on heavy road works and now owns his own residential business, GP Wilson Grading & Excavation.

But the Bantam truck-mounted crane stuck in his mind.

Ten years ago he decided to buy it.

As fast as hydraulics? 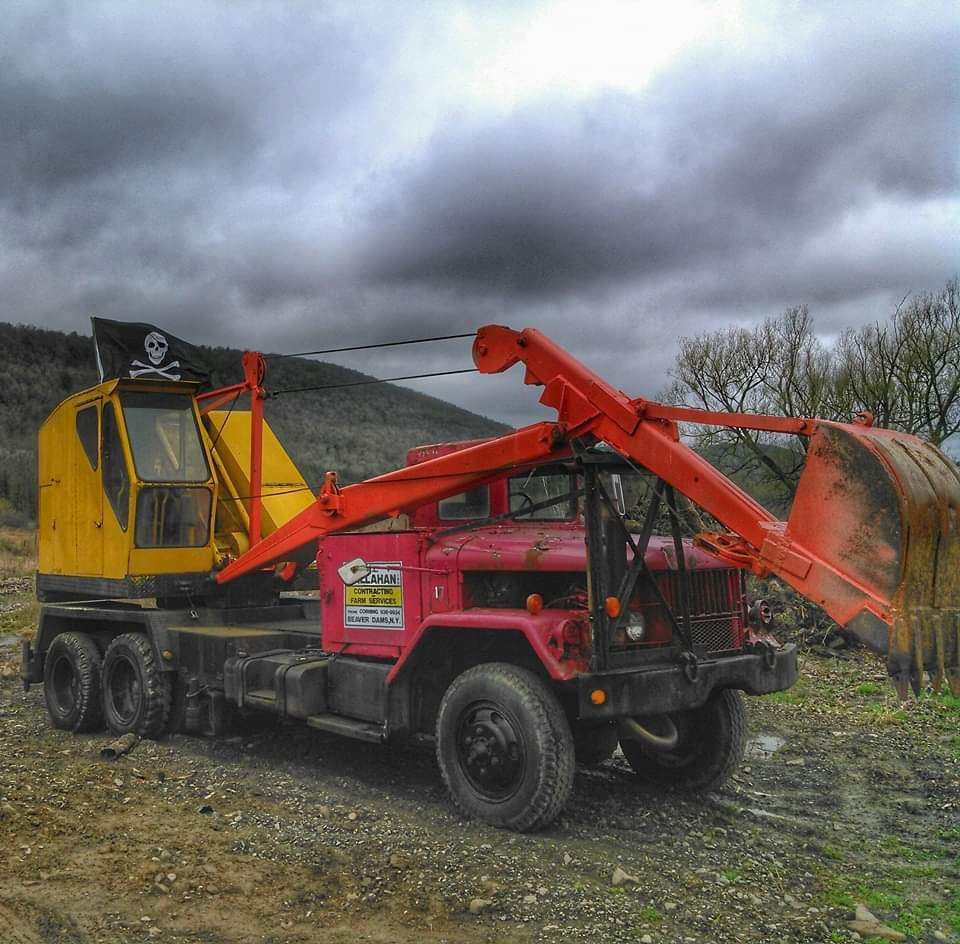 Garret Wilson’s 1961 Bantam T-350 mounted on a 1952 “Deuce and a Half”.Garrett WilsonAlong with learning from the old-timers, Wilson realized that today’s young operators would never be successful before hydraulics.

“It intrigued me because I wanted to see what was so hard about it,” he says of the cable machines. “And I also respect the history of those kinds of things, things that built the world we live in today. It took a lot more skill and more knowledge and talent.

So he put a backhoe on his newly purchased Bantam and climbed inside.

“A lot of people find it hard to believe, but I didn’t really have a hard time,” he says. “I studied so much that I knew what I had to do.”

He understood how all the clutches and brakes work and how the different cables interact.

“When you have to pull the clutch levers and apply the brakes and all that kind of stuff to operate these backhoes and shovels and cranes, it’s not like all that modern stuff, where when you release the controls, everything stop.” he says. “With those old stuff, if you let go of the controls, the stuff falls out of the sky. You need to be aware of how everything works and the coordination needed to make it work in one smooth motion.

Another thing that might be hard for modern operators to believe is that he can dig with the cable backhoe as fast or faster than with a hydraulic shovel when simply digging in a straight line.

“I’ll go to a show…and people will stand there and watch in amazement, because they just assume it’s old and slow,” he says. “And that’s actually not the case. It’s the exact opposite in the right hands. But the problem is that not everyone is… cut out for it.

Don’t you think he can run fast? Check out this video Wilson submitted of himself to the controls:

Wilson was at the Pageant of Steam antique equipment show in Canandaigua, New York in 2014 when he saw a 1965 Bantam C-350 crawler crane. He let the owner know if he ever wanted to sell it to call.

A few years later, he called.

The 8-ton capacity crawler crane has two-speed independent travel and can dig up to 18 feet 10 inches. It had been used in a rock quarry in Syracuse but not as a production machine. 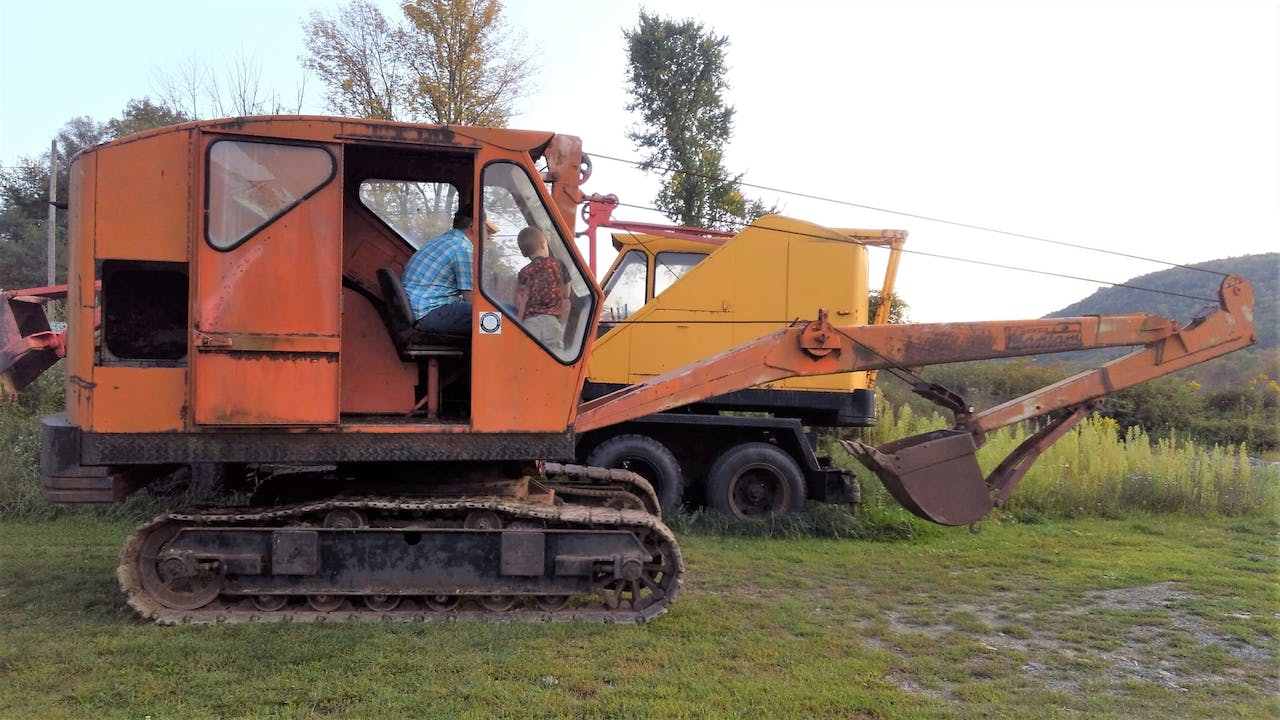 Garret Wilson at the controls of his 1965 Bantam C-350 crawler crane before restoration.Garrett WilsonWilson cleaned it up and did some restoration work on it. He applied a primer, sanded it down, and added stripes and decals. He got it in pristine condition, and it now resides in the Historic Construction Equipment Fairgrounds in Smethport, Pennsylvania.

Then this year, he found the third type of Bantam friction machine on social media: the CR-35 Bantam Trolley Crane.

“The trolley crane was the original wheeled excavator,” he says, “because you could put the cable backhoe on it.”

It sits on a two-axle self-propelled carrier with the top section of the Bantam Crane on top. The owner had inherited him with property and wanted to make sure he would go to a good home.

Wilson grew up with Drott and Case 1085 wheeled excavators. He also has a stock Drott 40 on rubber tires.

He has not yet been able to verify the railcar crane’s serial number to determine its exact model date, but he believes it dates to the mid-1950s. Schield Bantam began producing the CR- 35 in 1953 as the first self-propelled crane.

“It will be my favorite because wheeled excavators have always been my bread and butter,” he said just four days before traveling to collect it. “I grew up with them.”

He plans to outfit it with a backhoe attachment he already owns once he gets it fixed and running. For him, it represents the triple crown of his collection.

“This Bantam CR-35 wagon crane is like my holy grail.”

Check out more photos of his trio of Bantam cranes below: 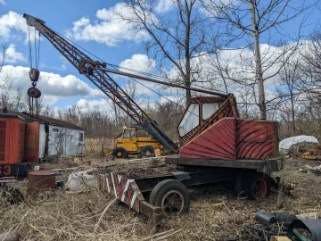 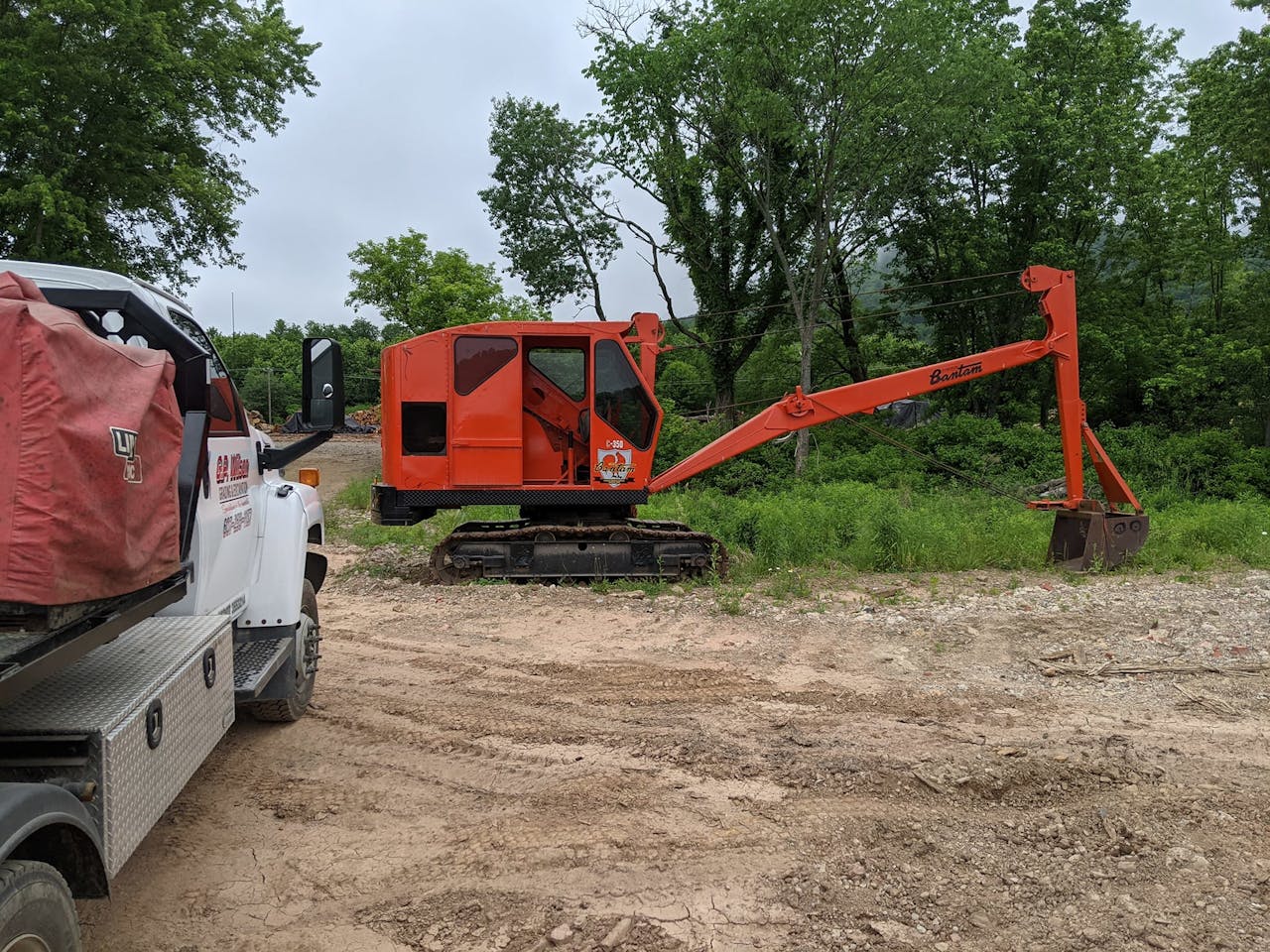 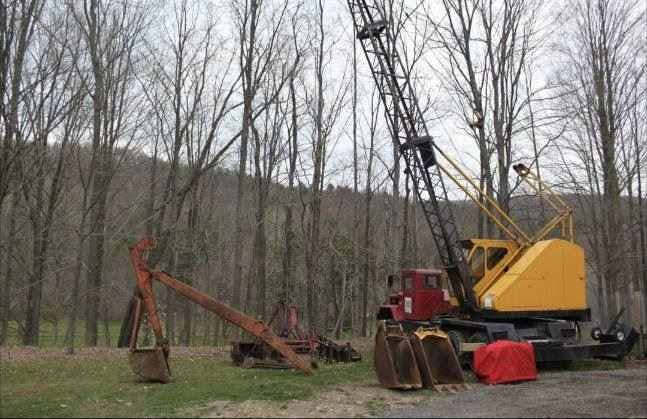 The rich are borrowing billions of dollars ...